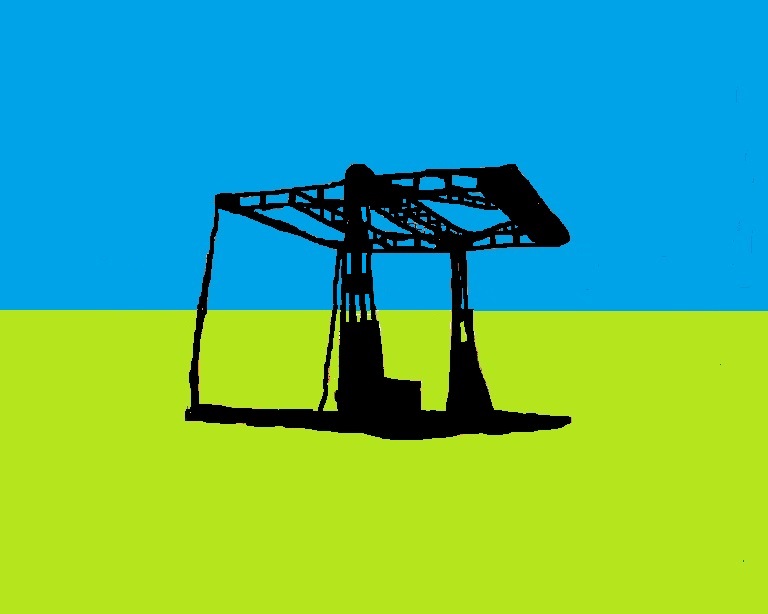 It started as a ludic protest, but the intentions were clear: the inhabitants of the small Dutch hamlet Hakkelaarsbrug could take care of themselves. A visit to the founder Cees van Apeldoorn.

As he rolls a cigarette, Cees van Apeldoorn shows the 50-year old Volvo he likes to tinker with in his spare time. For more than forty years Van Apeldoorn lives in Hakkelaarsbrug, a hamlet of approximately hundred inhabitants. Two streets run through it: the Googweg and Naarderstraatweg. Additionally, there is the drawbridge of the same name.

According to Van Apeldoorn, the township was overlooked by the municipality of Gooise Meren. Rarely the inhabitants saw a delegate of the local government. The Hakkelaars, as the inhabitants of Hakkelaarsbrug are called, were mostly self-reliant. Complaints about cars driving reckless weren’t heard. The block of houses at the Googweg doesn’t have a proper pavement. Hakkelaar Herman even had to install the street lights at the Naarderstraatweg himself.

This didn’t feel as a big problem up to the widening of the motorways A1 and A6 and the construction of a railway bridge. Residents united themselves in the Buurtschap Hakkelaarsbrug Foundation. They were afraid of the expected noise and were upset the initial plans from 2011 had changed drastically. In 2014 the members of the foundation hung banners throughout the village, sent postcards to various institutions and red roses to Melanie Schultz van Haegen, Dutch minister of Infrastructure and the Environment – without satisfying result. In 2015 the works started on the 55 meters high steel viaduct, and on 26 August 2016 the Zandhazen bridge opened.

Hereafter the hinder continued. Roadworks happened at night regularly. Cracks occurred in surrounding houses. The damage for some was up to thousands of euros. Complaints to the local government fell on deaf ears. In the end, the inhabitants decided that enough was enough. Van Apeldoorn: ‘If no one didn’t pay any attention to us, it wouldn’t bother anyone if we would separate us and start our own republic. From then on we would take care of ourselves.’ So, on 22 July 2017 at 14.00 hours, he declared the independence of the Free Republic of Hakkelaarsbrug.

The Free Republic of Hakkelaarsbrug originated out of ludic protest. When Van Apeldoorn is asked if he’s the unofficial mayor of the micronation, he resolutely denies it: ‘No, no, no… rather not write that!’ The Free Republic of Hakkelaarsbrug doesn’t have a form of government, has no political parties, elections aren’t held. ‘Everyone is equal,’ he adds. An app and a Facebook-group act as the senate.

A meeting was initialized and peace was signed soon. A picture of the mayor of Gooise Meren Han ter Heegde and Cees van Apeldoorn shaking hands ended up in a local newspaper. They were allowed to leave the signs till the end of August 2017.

A week before the foundation of the Free Republic every Hakkelaar received an envelope with some curious items: a flag, a passport, banknotes and stamps of the brand-new country. The creative background of Van Apeldoorn came up handy. ‘The Free Republic of Hakkelaarsbrug is the largest artwork of the Netherlands,’ he claims.

On the flag the drawbridge is displayed pontifically. The blue colour symbolizes the sky, the green colour the meadows, as quite a few agrarians live in Hakkelaarsbrug. Various old maps of the surroundings are shown in the passport. The country even has its own money. The currency is the Hakkelaar. For the paper money Cees has been inspired by art as well: from Mondriaan to Pollock, from Dali to Willink. The latter naturally had to be added, because villa Flevorama in Muiderberg is object of one of Willinks paintings. Lastly Cees van Apeldoorn created stamps: one of 1 Hakkelaar with the image of the old bridge, and one of 2 Hakkelaars with the portrait of Floris V, count of Holland and Zeeland, who was brutally murdered in Hakkelaarsbrug on 27 June 1296. In the middle of the bike lane across the stables a plaquette memorizes the event. Cees posted a letter with one of his own stamps to himself. It arrived.

The responses of the residents were mostly positive. The small flags could be seen in the windows of many houses. The signs were put in some gardens of, for example, Van Apeldoorns neighbour, the farm of the family Koekoek, who was very active as well in protesting against the plans, and the White House, where sometimes village meetings were held. The White House has a rich history. Situated on the edge of Hakkelaarsbrug, the White House was built as a waiting room for the steam tram, which ran from Amsterdam to Muiderberg. It served as a café-restaurant as well. Later, in the 1950s Lou de Palingboer, who believed he was a resurrection of Jesus Christ, settled there with his followers until he moved to America in Limburg.

The declaration resulted in dozens of ludicrous ideas, which never saw the light of day. The Free Republic could abolish summer time, could start driving on the left (immediately bombarded as a ridiculous plan). A kilometre-high artificial mountain, an idea of cyclist and journalist Thijs Zonneveld, could be built in the hamlet. Cees also hoped to join the Eurovision Song Contest. He therefore wrote Ferry Heijne, the vocalist of the theatrical punk-rock formation of De Kift. Heijne enthusiastically replied, but unfortunately had to pass, because he was busy recording.

On a random evening at the riding school, where Van Apeldoorn’s daughter rides horses and he is behind the tap, a friend asked jokingly if the ministate had a national anthem. A few hours and a few whisky-cola’s later a text and melody were written (text in Dutch).

The future of the Free Republic

Nowadays the Free Republic is not as vivid as after its founding. The grievances are less profound, but still, there are some issues which require attention. The voltage of electricity posts will be increased in favour of Almere and Lelystad. The houses on the Googweg still don’t have a pavement and at the beginning of the township thresholds have yet to be installed. Additionally, cars keep driving too fast. Surely, the Hakkelaars of the Free Republic will be committing themselves to those petty causes. What’s left behind is the feeling of solidarity. The inhabitants got together more closely. The Facebook-group is a living reminder of that.

Olaf van Muijden is historian and one of De Facto’s explorers. He is based in Amsterdam.